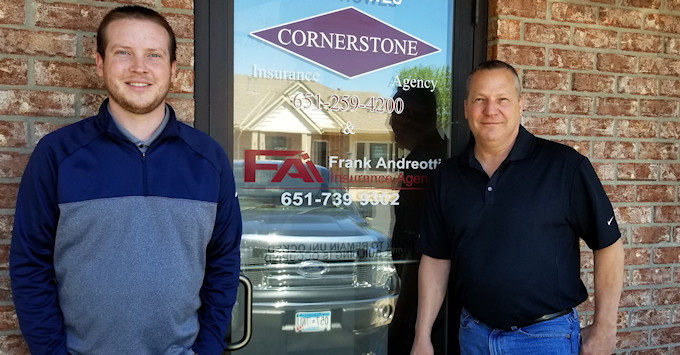 Frank and Mike’s relationship goes way beyond sharing office space next to each other. Mike and Frank have actually known each other since little league baseball. Mike said, “I’ve known Frank Andreotti since we were kids and know that he is a stand-up guy and will take care of my policyholders with the utmost respect and professionalism.”

Customers of Cornerstone Insurance should not expect to see many changes with regard to the companies they are currently insured with, as Frank Andreotti and his son Jake represent almost all of the insurance companies that Mike represents as well as a few others, and are very familiar with their coverages and have existing relationships with company personnel. Additionally, Mike will be around for the new few months assisting with the transition.

Over the next few weeks, Frank and his son Jake Andreotti will be reaching out to Cornerstone clients to introduce themselves and offer an insurance review if appropriate. When asked about the merger, Frank said, “I’m truly looking forward to meeting all of Cornerstone’s clients and serving their personal and business insurance needs for years to come.”

Insurance can be confusing at times and everyone's needs are different. If you have questions regarding coverage, pricing, or anything else related to insurance, send us an email or give us a call.

If you'd like to get a free, no-obligation quote, all you have to do is ask!

Contact Andreotti Today!
Get a Quote!
Refer a Friend!
Love frank. He is the best.

Jakob C.
20:00 05 Jul 22
I have been with the Frank Andriotti Insurance Company for many years now and I have always wanted to write a review and now absolutely need to do so. I have had broken & cracked windshields in the past, as well an an accident from one of my children and Frank has always gone above and beyond in a very timely manner. I have had two windshields replaced in the same day on site wherever I am. I have just recently had a neighbors tree fall on my garage, as well as storm damage (like everyone else) and hated to make a claim, but I did. I received a claim # immediately, had an agent from Acuity call me right away (Jacquelyn Thompson) and explain what the next steps were. I had an adjuster out immediately who met with the contractor and they assessed the damage together the next day, and the claim was approved a day later!This all started on April 8th and as of last Wednesday, I have an entire new roof on my house!Again, I cannot say enough about my agent, but Acuity as well. The rates probably are not the cheapest, but the service and expectations were way exceeded. Thank you Frank & Jake for an outstanding job!Sincerely,Ted Beaulieu

Sara O.
11:58 10 May 22
Highly recommend for insurance super personable and willing to go through all the necessary steps with you

Haley D.
21:06 04 Apr 21
Bought a new vehicle and needed to upgrade my insurance. Called the Andreotti’s up to inquire about some options. Got me comprehensive insurance with roadside assistance package (best insurance I have ever had), and somehow I am paying less for full coverage insurance than I was paying for basic insurance on my old beater car. I must have been getting a bad deal from those other guys, but I found the right ones! 👍👍👍

Scott N.
15:55 15 Jan 21
We have all of our vehicles and our home with Andreotti Insurance. Frank shopped out our needs and saved us a couple hundred bucks a month. Can't beat that and Frank is a great guy to deal with.Make the switch, you'll be glad you did.

marie S.
18:28 01 Apr 20
Frank does a great job explaining every option I have. Very professional and knows this business in an out! I would highly recommend Andreotti Insurance!

Jason J.
23:38 30 Jan 19
Frank is THE BEST!! He truly delivers when it comes to customer service satisfaction and a persons specific needs for insurance. I would recommend Frank 100 times over again!